All About the Duiker Antelope of Uganda

A duiker is a small to medium-sized brown in colour antelope native to Sub-Saharan Africa. They are found in heavily wooded areas. The 22 extant species, including three sometimes considered to be subspecies of the other species, from the subfamily 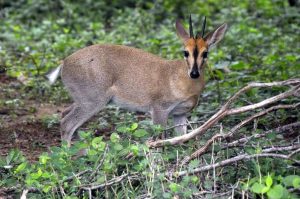 Duikers are split into two groups based on their habitat: forest and bush duikers. All forest species inhabit the rainforests of Sub-Saharan Africa, while the only known bush duiker, grey common duiker occupies savannas. Duikers are very shy, elusive creatures with a fondness for dense cover; those that tend to live in more open areas, for example, are quick to disappear into thickets for protection.

Because of their rarity and interspersed population, not much is known about duikers; thus, further generalizations are widely based on the most commonly studied red forest, blue, yellow-backed and the common grey duiker. In tropical rainforest zones of Africa, people non-selectively hunt duikers for their fur, meat, and horns at highly unsustainable rates. Population trends for all species of duikers, excluding the common duiker and the smallest blue duiker, are significantly decreasing; Aders’ and particularly the larger duiker species such as the Jentink’s and Abbott’s duikers, are now considered endangered by the IUCN Red List of Threatened Species .

Would you like to see and learn about duikers in Uganda? Why not book a Uganda safari with us and travel with us in the very best savanna national parks of Uganda.